Your Trash, our Treasure!

This month we’re focusing on some of the less obvious things you can donate at Jane‘s to help us raise funds. 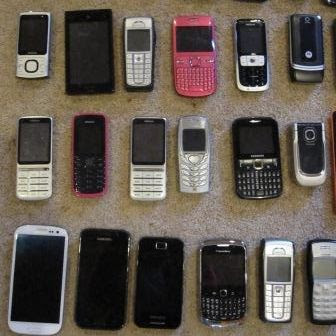 If you’re anything like me, you’ve probably got at least one old mobile phone tucked away somewhere.  It’s broken or no use, the battery doesn’t hold charge, it’s locked to a network you don’t use and it might even have real buttons rather than a touch screen!  But if you bring it to Jane‘s we’ll put it with lots of other phones and then sell them as a joblot on ebay.  Our last box of phones raised almost £150.

We have to wait ages to have enough used postage stamps to sell, as they weigh so little, but this carrier bag full has given us a recent boost and will be put with all the others we have saved.  They also go on ebay, described as ‘kiloware’, and are a really good example of something that many people throw away that can raise money for us.

Unused, branded ‘big box’ toner cartridges of the type used in offices are often just sent for recycling when office printers are replaced.  But if they are branded (HP, Canon, etc., not third party compatible ones) and sealed in their original boxes they very often have a value to us on ebay.

Finally, we are still collecting obsolete and foreign coins and notes.  These are sent off to a company that specialises in this area and they sell them on our behalf.  The last bag we sent them raised over £200.